ANNOUNCEMENT: Training at all our public venues in Metropolitan Melbourne is open from Friday 11th June. Regional Victorian classes remain open
Find out more Dismiss
Back to News

Fainting can be a fairly common occurrence, but nonetheless, it is concerning to see someone collapse in front of you with no warning. You may not know if they’re simply fainting or having a serious incident such as a sudden cardiac arrest that could result in death. Once you learn the correct fainting First Aid treatment you will become more confident and able to help someone who feels faint.

It can be triggered by any of the following:
• emotional shock
• pain
• over-exertion
• exhaustion
• lack of food
• dehydration
• sight of blood
• standing immobile in hot conditions
• standing up suddenly (particularly for the pregnant or elderly)
• heart rhythm changes or underlying heart conditions 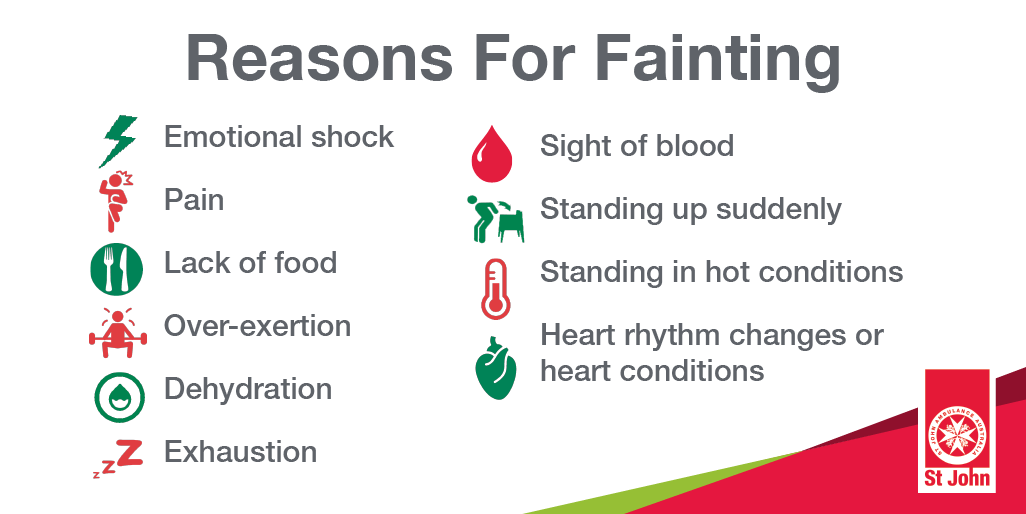 The casualty may:
• Lose consciousness/feel light-headed
• Feel dizzy or have vertigo
• Have faded or blurred vision
• Feel nauseated
• Have a pale, cool moist skin
• Have numbness in the fingers and toes

What Not To Do For Fainting First Aid

Do not:
• Get the casualty to sit down with their head between their legs
• Splash the face with water
Neither of these techniques are effective at preventing fainting or helping someone manage faintness.

How to Manage Faintness

Usually, people recover quickly, often within seconds, without lasting effects. However, if fainting is the result of an underlying medical condition or is recurrent, the casualty should see a doctor.
Here are the steps to follow for fainting:
1. Follow DRSABCD. If the casualty is not breathing it could be sudden cardiac arrest.
2. Loosen any tight clothing that could be restricting their breathing
3. Ensure there is plenty of fresh-air – open a window if possible
4. When the casualty becomes is conscious, lie them on their back and raise and support their legs. Kneel down next to them and raise their legs by placing a pillow under their calves. Watch their face for signs that they’re recovering. For a woman in advanced pregnancy, place padding under right buttock to tilt.
5. Treat any injury resulting from a fall 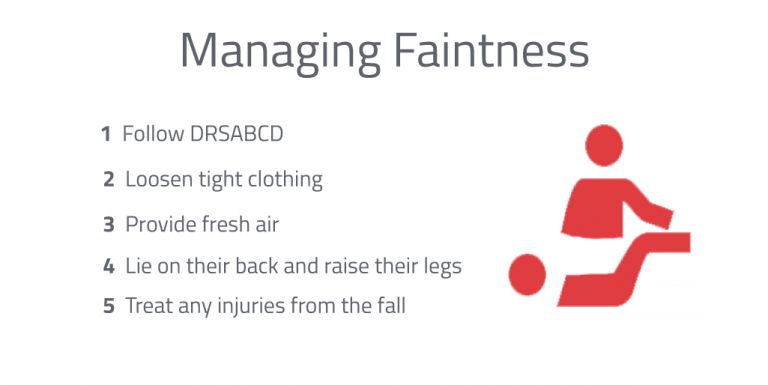 If you feel yourself becoming faint, lie down on the ground until the feeling passes. This will stop you from hurting yourself.
Other ways to help yourself if you feel faint are:
1. Keep hydrated with plenty of water
2. Don’t get up too quickly from lying or sitting down
3. Control your breathing
4. Controls triggers such as phobias (e.g. needles)

Would you be able to tell the difference between fainting and something more serious like Sudden Cardiac Arrest? Seconds matter and it's vital we know the signs. A First Aid course can help you determine exactly what steps to take to save a life.