First Aid Tip – How to Stop a Nose Bleed

A nose bleed is something most of us encounter at least a few times a year. Often unexpected and inconvenient, understandably we want them to end as soon as possible.  Whether it’s a child, another adult or ourselves, the distress of having blood gushing out of your nose is unpleasant and knowing how to stop a nose bleed the right way will put you at ease the next time you suddenly find yourself with one.

Why Do Nose Bleeds Happen?

Understanding the cause of a nose bleed can help you better understand why it’s happening and how to prevent them from occurring in the future. However, some nose bleeds have no obvious cause and may seem sporadic and unexplained.

What You Should Not Do To Stop a Nose Bleed

Before we tell you how to stop a nose bleed, we would like to point out a few of the techniques people sometimes use that are unhelpful:

Tilting the head back or lying down can cause blood to run down the back of your throat and into your stomach. This can irritate your stomach and cause vomiting, which can cause the nose to start bleeding again. If you or the casualty find blood making its way into your mouth, spit it out rather than swallowing and ensure you lean forward more. 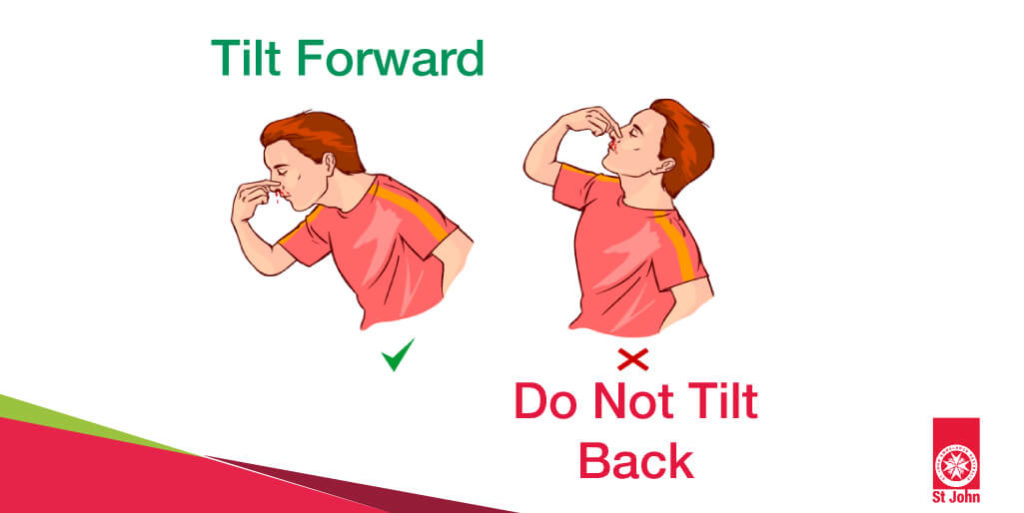 What To Do – How to Stop a Nose Bleed

Follow these steps to know how to stop a nose bleed:

If the casualty has lost a lot of blood or feels faint, seek medical aid also.

Stopping a nose bleed as soon as possible will reduce distress for the casualty and all involved. Not to mention reducing the loss of blood, keeping the casualty as well as possible. With nose bleeds a common occurrence, particularly with children, knowing how to stop a nose bleed quickly and with the least amount of trauma is something everyone should know. Bitesize Wounds and Bleeding
Learn how to successfully provide emergency first aid for a casualty suffering wounds or bleeding in this interactive online course.
Find out more Book now Designed for parents and carers. Learn to manage basic first aid situations specific to babies and kids up to 7.