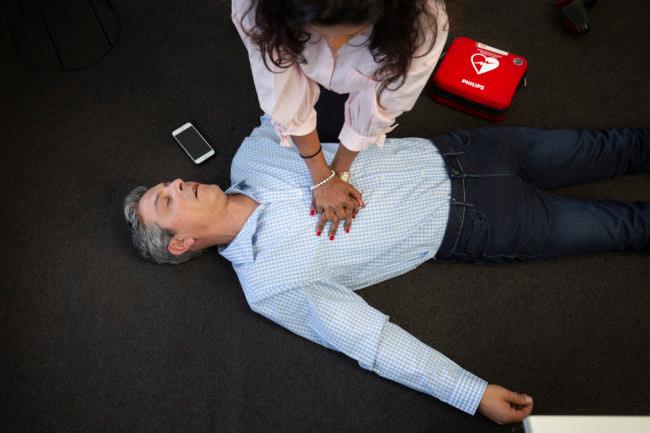 Out-of-hospital cardiac arrest (OHCA) remains the leading cause of death worldwide. To put it simply, cardiac arrest is a sudden loss of blood flow resulting from the failure of the heart to effectively pump. Fortunately, if we all work together, there are ways to increase the cardiac arrest survival rates. One essential way we can all make a difference is through cardiopulmonary resuscitation (CPR) and defibrillation. When CPR and defibrillation is provided quickly, alongside an effective system of care, the chances of an arrest patient being resuscitated and having good neurological recovery greatly increases.

1. Each year across Australia, as many as 30,000 out-of-hospital cardiac arrests (OHCA) occur

Out-of-hospital cardiac arrest (OHCA) remains a significant public health issue in Victoria. Across the nation every year, as many as 30,000 OHCA’s occur, with just less than 10% of arrest patients surviving. This shocking statistic identifies the importance of people completing first-aid training and learning how to perform CPR . Why is this so important? It’s quite simple really, CPR is part of the lifesaving combination in sudden cardiac arrest first aid.

Cardiac arrests are continuing to increase across the state, with Ambulance Victoria attending to 6,434 patients in 2017/18 – the most cardiac arrest cases ever! This is 6.6% up on the previous year. Of these 6,434 patients, most were male (66%) with the median age of 68 years and 34% female with a slightly higher median age of 72 years. 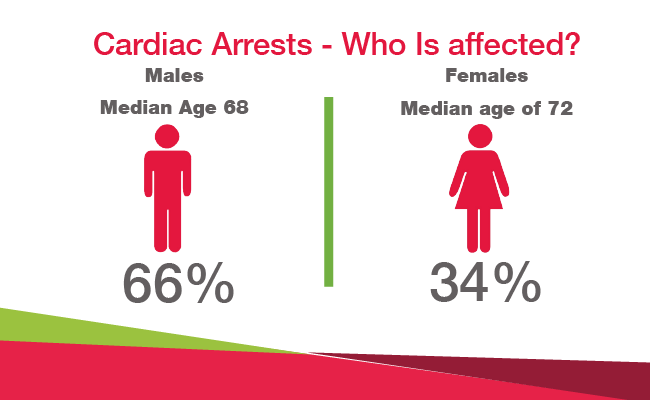 Generally speaking, OHCA usually follows a seasonal pattern with a higher incidence and lower survival rate during winter. Throughout 2017/18 first quarter (July to September) there was an unprecedented number of OHCAs in Victoria (1,831). Compared to 2016/17 (1,668) there were 163 more OHCAs during the first quarter of 2017/18.

A scary but true fact is that the high majority of cardiac arrests (3 in 4) occurred in private residences. Additionally, 14% occurred in a public place, 9% were in aged care facilities and 1% in medical facilities. Unfortunately, because most cardiac arrests happen inside the home, the likelihood of having a paramedic nearby is very unlikely. Therefore, it places great importance on family members and neighbours to understand what to do in an emergency, so they can step in and increase the chance of survival.

5. The cardiac arrest survival rates of OHCA patients is just 10%

Typically, less than 10% of cardiac arrest patients survive – an alarming statistic! However, if CPR together with defibrillation are provided within minutes, this offers the best chance of survival. For every minute that passes without CPR and defibrillation, the chance of survival for a casualty decreases by 7 to 10 percent. In a cardiac arrest episode, the best way to increase the likelihood of the casualty surviving is by following the chain of survival – the internationally recognised initiative aimed at maximising cardiac survival rates for out-of-hospital cardiac arrests. The four-key links in the chain involve correct identification and early access to help (000), early CPR,  early defibrillation and early access to advanced cardiac life support. If ever in this situation, by following these steps we can increase the likelihood of causalities surviving a cardiac arrest episode.

Generally, people’s perception is often that paramedics will show up in time to save their loved one, however the average ambulance response time is 7.6 minutes – which is often just too late. Typically, bystanders are the first on scene and make the emergency call (early access). Additionally, three of the four steps of the OHCA chain of survival can be carried out by bystanders, which is why it’s important we are fully equipped and ready if ever put in this situation.

7. Of the 6,434-bystander witnessed OHCA events only 1% received early defibrillation

Perhaps the most alarming statistic – just 82 of 6,434 OHCA events received defibrillation. Our bold goal at St John Ambulance Victoria is for this 1% to reach 50% defibrillated by 2023, as part of our 5-year strategy. Many different approaches will need to be adopted for this number to be reached, including more defibrillators, better education on how to use a defib and awareness of the location of defibs.

If an AED is located near the location of the arrest and they are aware of how to use one, bystanders can provide vital defibrillation prior to the arrival of emergency services, therefore increasing the cardiac arrest survival rate. People should be always aware of where the nearest defibrillator is located in case, they ever happen to need it. AEDs are very user-friendly, they provide voice prompts that guide you through the process meaning you don’t necessarily need formal training to use one.  Early defibrillation does really save lives, in fact it can increase the survival rate to as high as 70%. You can learn more about AEDS here.

Someone collapsing into unconsciousness in mere seconds is not something you should take lightly; cardiac arrest is the biggest known killer of our modern world. Unfortunately, the number of deaths occurring from cardiac arrests don’t show any signs of slowing down so if we want to see our loved ones surviving, it’s up to us. We strongly believe that with the right knowledge, the right training and the right equipment we can together increase the cardiac arrest survival rate. 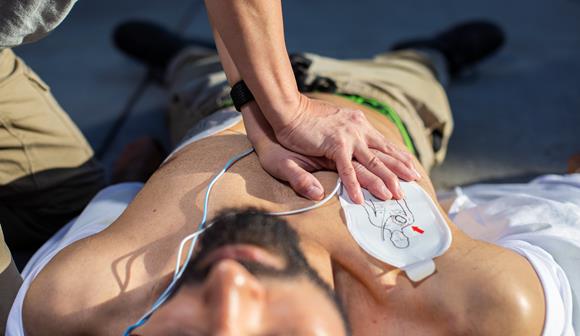